I struggled a lot at the start of the weekend with the car as I could not seem to get a time out of it. It was uncertain at the time whether it was my fault or if there was damage on the car as I knew for sure it would not have been down to the set-up.

After qualifying very poorly, placing p8 for the Scottish and p14 for the national, I was very relieved to see the rain pour down come race time. The first race was the Scottish and after lap 1 I had contact on the exit of the hairpin which then put me back down to 12th. I fought my way back up the grid putting out fastest laps and purple sectors (quickest through a series of corners) and finished p2 by the end of the race. The National race was very much the same with around 30 cars on the grid. Thankfully with no contact, I battled my way to p6 after a number of safety cars and top class competitors to get by. Ending the Saturday on a high put my mind in a good place for the 4 more races I had on Sunday.

Sunday was dry throughout the whole day and so I knew I had to put the negative thoughts behind me about not being competitive in the dry for whatever reason. The first race was the national and with a lot of battles gaining and losing positions, I managed to finish p5 – which was a good result.

Starting p2 on the grid for the Scottish race, my plan was to beat the competitor who was on pole position by the time I got to turn 1. Thankfully, after getting a great start, I had already passed the car by the time I reached turn 1. Ross Martin was very quick that race and was glued onto my gearbox the full race making moves in order to get past me. After defending hard for near enough the full race, I managed to cross the line in p1 to bring home my first win!

In the final national race I started on the grid in p2 out of the 30 cars that were competing and again, my plan was to be in p1 by turn 1. I managed this, but by the end of the first lap a safety car had been deployed and the gap that I had pulled out was ruined.

I got off to a good start after the safety car, pulling a slight gap which earned me a lap or so of not having to defend, then led the national for 9 laps but then after a competitor dived down the inside through the left hander at turn 1, we touched wheels which sent me onto the grass and eventually into the gravel and ended the race on a DNF which was a disappointment as I was en-route to a good finish in a very competitive race filled with great drivers.

Despite the DNF, I was the announced as the driver who led most laps during the race which was a bonus and showed my competitiveness.

The last race of the day was the Scottish championship where I was starting from P1 on the grid. This was a very important race as it was for the David Leslie Trophy which is the biggest race in the whole of the Scottish Championship. During the race I dropped down to P3 although from my view of the competitors in front of me, I could tell something was going to happen as some very risky moves were being pulled.

When the last lap board was held out, I decided to drop back about a car length from Kenny (Cowie) and Ross (Martin) in front of me in p1 and p2, so that if there was contact between them, I wouldn’t be involved in it. I knew that by dropping back a car length I could still make a move if it looked like they weren’t going to crash into each other. 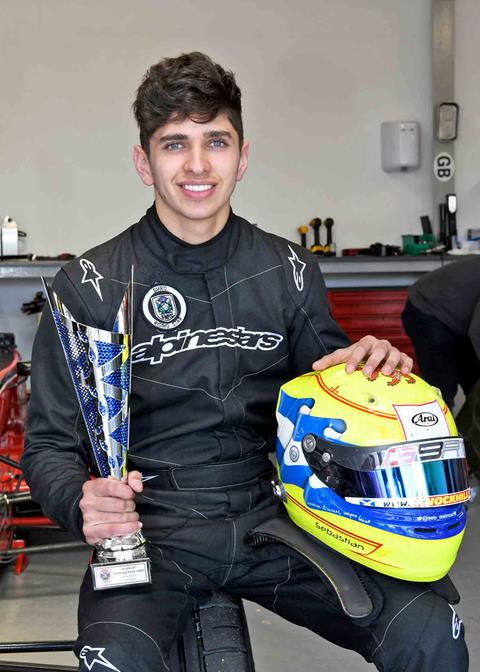 My judgment was correct and on the last lap at turn one they came together and both ended up crashing out of the race. I cruised round the remainder of the lap to take the chequered flag to win the David Leslie Trophy.

This was a proud moment as David Leslie was a true hero in the sport and I was very fortunate to not only now have my name on the trophy dedicated to him, but to also meet his family and be presented the award by Mrs Leslie.

Very glad that my team mate was fine after his big crash and a big thank you goes to Gavin Ray for manufacturing such a safe car.