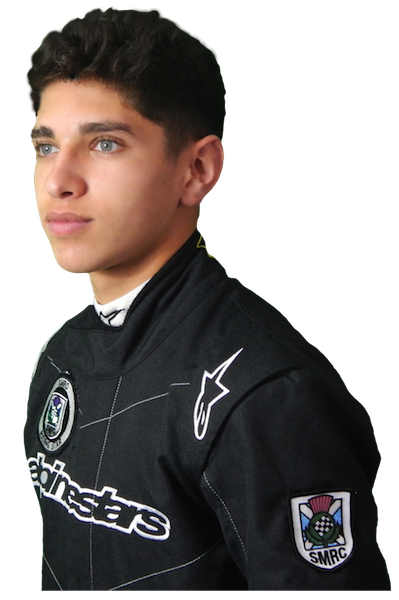 I am delighted to announce our sponsorship of Scottish Formula Ford racer Sebastian Melrose for the 2017 season.

Better known as Seb he is a highly talented member of the Graham Brunton Racing team and is competing in the Scottish and National Formula Ford 1600 Championship.

Seb is no stranger to the world of motorsport as he is the Godson of the legendary four times winner of the Indycar championship, Dario Franchitti. Born in 1998 Seb has grown up in the world of motorsport spending time with Dario and Marino Franchitti, Paul Di Resta and Allan McNish. It is with no doubt that motor racing is now in Seb’s blood through this very close association.

Many racers start their career in Karting and progress into Formula Ford and other series depending on whether they desire to enter open top or tin-top (likes of saloon cars, Le Mans etc) Seb however missed that step and joined Graham Brunton’s very successful team in 2014. I know Graham well as we were both racing in different championships in the late 1980’s. He was himself a very talented Formula Ford driver and now with his wife Heather has used over twenty years of experience to run a highly successful racing team. I will be doing a feature video with Graham Brunton Racing soon!

Having spent some quality time with Seb he just oozes passion for his love of motorsport and has a wonderful personality too that for me just inspired me to become involved in Seb’s journey all be it in a very small part.

In 2015 Seb was awarded the “Rising Star” trophy by theScottish Motor Racing Club.

His success continued through 2016 where he was a finalist at the Brands Hatch Formula Ford Festival. With his very short career in FF1600 that in itself was an amazing achievement. Later in the year was a finalist at the Walter Hayes Trophy at Silverstone and for his seasons success won the SMRC Single Seater Young Driver award.

Seb has a very clear vision of where he wants to go and that’s Indy Car racing following in the footsteps of his Godfather Dario and if I could take a visit to Ladbrokes this afternoon I would happily place a bet on him competing there one day!

This year there are some great prizes at stake for Seb that will be a valuable stepping stone to his Indycar career.

The driver who impresses most in the Scottish Motor Racing Club in 2017 will be selected to test with the official Audi Motorsport Team and become a works driver. In addition to this if Seb can pull off the Scottish Formula Ford Championship then he will be given the opportunity to compete for a seat in the Mazda road to Indy Series. Good luck Seb!

So while reading this you may be thinking what is the link between EWC and Motorsport. I have a love of all things around sports cars, I enjoyed racing as an amateur ( some would say very amateur!) racing driver in the 1980’s and as a company I attend number of sports car and motorsport events as a business. The synergy between luxury watches and sports/racing cars is very strong and we have many customers in that arena.

Sponsorship as a form of marketing is highly expensive, here EWC is just putting its toe in the water but as I write this post it is not always just about the money but in some way just trying to support an individual I really admire who came to me a few months ago as Seb who loves watches too simply wanted to invite my company to be a part of his racing journey.

Some of you reading this will be business owners or perhaps responsible in your company for marketing/sponsorship. If you are considering your future marketing and perhaps in the world of motorsport then maybe supporting a future star such as Seb Melrose may be an idea. He will be competing across the UK as well as at his home circuit at Knockhill so your marketing will have national coverage at events, on Televisions and across multiple social media.  Please get in touch with me directly and I will effect an introduction.

I share some photos (courtesy of Rachel at Bournephotgraphic) from the June race at Knockhill Racing Circuit. Here Seb had a very successful day winning two out of three races and the coveted David Leslie Trophy to put the icing on the cake.

Wishing Seb every success throughout 2017 and on the road to Indy.